The Reason Roundtable « »
Why Is Biden So Utterly Useless on Inflation? 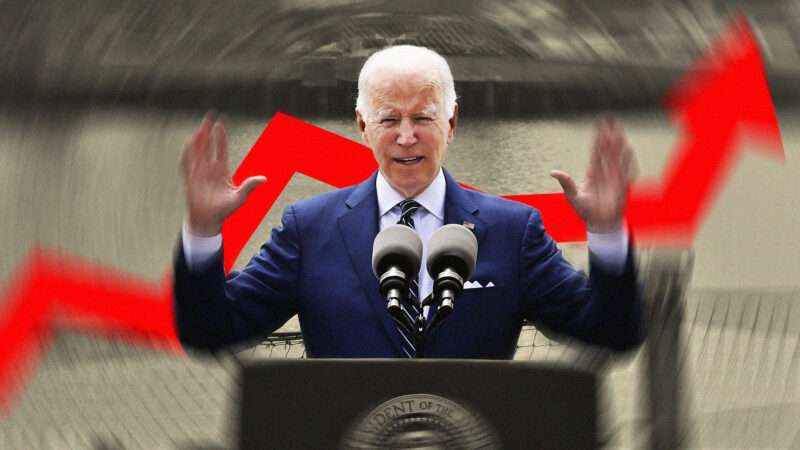 This week on The Reason Roundtable, senior editors Matt Welch, Katherine Mangu-Ward, Nick Gillespie, and Peter Suderman discuss the beginning of the January 6 hearings, the inflation crisis reaching new heights, and the results of the June 7 elections.

31:01 Weekly Listener Question: Who is in charge at the White House? Several times we've heard the president make off-the-cuff remarks only to have the "White House" walk it back afterward. Who's making that call? Who speaks for the White House? Obviously the president isn't the one running the show. Is our government a reboot of Weekend at Bernie's? Who is the man behind the curtain we are not supposed to pay attention to? How did they get this position?

"Inside Biden's frustration with soaring prices," by Tyler Pager

"Out of Desperation, Democrats Resurrect 'Insurrection' Theater," by Ron Paul

"The January 6 Hearings May Be Surprisingly Worthwhile," by Elizabeth Nolan Brown

"Why the Memory of Jan 6. Can't Prevent a Trump Resurgence," by Ross Douthat

"Biden Is Clueless About Inflation," by Nick Gillespie and Regan Taylor

"What the Chesa Boudin Recall Means for America," by Nick Gillespie and Regan Taylor

"Is California Over?" by Nick Gillespie and Regan Taylor

"10 Republican Voters in Swing States on Trump's Hold on the Party," by Patrick Healy and Adrian J. Rivera

Music: "Angeline," by The Brothers Steve

The post Why Is Biden So Utterly Useless on Inflation? appeared first on Reason.com.

4d ago4d ago
Subscribe
Unsubscribe
Viikoittain
Sebastian Payne takes you into the corridors of power to unwrap, analyse and debate British politics with a regular lineup of expert Financial Times correspondents and informed commentators. New episodes available every Saturday morning. See acast.com/privacy for privacy and opt-out information.
T
The Wilderness

9M ago37w ago
Subscribe
Unsubscribe
Kuukausittain
What will it take to defeat Donald Trump in November? In season 2 of The Wilderness, Jon Favreau looks for the path to victory in 2020 by talking to voters, strategists, organizers, and candidates in the battleground states that will decide the election.
F
Face the Nation on the Radio

3d ago3d ago
Subscribe
Unsubscribe
Viikoittain
Margaret Brennan asks the biggest guests the smartest questions. Hear official Washington on the firing line, on your schedule.
T
The Seen and the Unseen - hosted by Amit Varma

3d ago3d ago
Subscribe
Unsubscribe
Viikoittain
The Seen and the Unseen, hosted by Amit Varma, features longform conversations that aim to give deep insights into the subjects being discussed. Timeless and bingeworthy.
P
Pod Save the People

1d ago1d ago
Subscribe
Unsubscribe
Viikoittain
Organizer and activist DeRay Mckesson explores news, culture, social justice, and politics with analysis from Kaya Henderson, De’Ara Balenger, and others. Then he sits down for deep conversations with experts, influencers, and diverse local and national leaders. New episodes every Tuesday.
T
This Morning With Gordon Deal Podcast

2h ago2h ago
Subscribe
Unsubscribe
Päivittäin
Wake-up with America's first news - Host Gordon Deal goes beyond the headlines with the day's first look at news and business news from the U.S. and around the world; bringing a lively blend of intelligent information, humor, and expert analysis to morning radio.
O
OPB Politics Now

5d ago5d ago
Subscribe
Unsubscribe
Viikoittain+
OPB Politics Now is a weekly podcast that takes a deep dive into the hottest political topics in Oregon and the Northwest. Every Friday, OPB’s political reporters and special guests offer in-depth analysis, discussion and insight into candidates, events and issues.
T
The Jason Stapleton Program

1d ago1d ago
Subscribe
Unsubscribe
Viikoittain+
A bootstrappers podcast for founders, entrepreneurs, visionaries and dreamers who are building businesses from the ground up without the taking on debt or selling equity. Here we cover marketing, sales, organization and mindset issues that matter to you
R
Reasons to be Cheerful with Ed Miliband and Geoff Lloyd